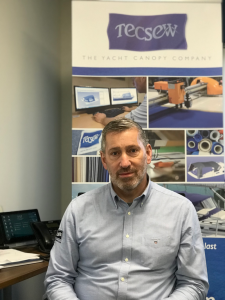 John Bland went into business with his father, George, in 1981, creating Tecsew; a manufacturing company that designs and creates marine covers and upholstery. Fast forward to today and John now runs the company with his wife, Ally, and they both recently attended two one-day British Marine Apprenticemakers workshops. They wanted to offer apprentices at Tecsew the most positive and enriching experience possible, and inspire young people to enter into this industry with aspirations for long-term careers within the company. John says:

“In this specialist field you can sometimes find skill gaps that the industry needs help filling, and we felt that one of the key things we could do was to ensure that we’re recruiting the right people from the apprenticeship stage, giving them the best experience that we could so that, hopefully, they’d want to be with us for 10-15 years – or even be thinking of this as the first stage in a lifetime career.

“In this industry the apprenticeship route is particularly important as there are so few marine-related courses that tie in directly to this trade. You get a lot of people who’ve studied such things as the broader subject of engineering, making it harder to find the right person for this job. So, not only do we have to attract the right candidates from the word go, but we need to make sure they have all the support to excel in the role.”

A number of different companies in similar fields attended the Apprenticemakers workshops last year, and John says how this collaborative community was key to making the events so beneficial and successful, and that they were very enjoyable too:

“Various businesses shared their experiences, and having that line of communication opened up was really interesting. We heard from other British Marine member companies who were responsible for training apprentices, and it was great to get their ideas and insight. We also took part in roleplay exercises where we acted out various scenarios and looked at the different outcomes – really hands-on stuff that made the courses relaxed and fun, and took us away from that traditional ‘sitting in a classroom’ learning.

“Of course, the focus was on mentoring and how it can impact our young staff, and our perception of mentoring has changed dramatically as a result. It’s about creating a supportive and encouraging environment and doesn’t actually need any formality; that’s what we really took away from the workshops. It’s about setting the right tone and catching up with your apprentice on how they’re doing over a cup of coffee – changing that set-up so it’s not, ‘oh, I’m being called up for a meeting with the boss, so I must be in trouble’. You need to build a rapport, give mixed praise and feedback, and make the apprentice feel like they’re already part of the team, rather than that being something that they graduate to if they ‘pass the first year’.”

John is a very hands-on manager and has always promoted a ‘can do’ attitude in his company that he passes onto his staff, with a strong business ethos that focuses on fairness, passion and positivity. Reinvigorated by the two Apprenticemakers workshops, John and Ally have made changes within Tecsew Ltd, and John says that they are already starting to see the effects of this:

“You see it almost straight away when it comes to teamwork, as the apprentices are feeling valued as an integral part of the organisation. We had two apprentices last year, one of whom is now full-time employed, and the other has been offered a full-time position at the end of his apprenticeship in April.

“Sadly, there are a lot of companies out there who take on an apprentice and then let them go at the end once they’ve completed their apprenticeship, and I think that’s incredibly unfair – people use it for cheap labour too, and that’s not right. Of course, there will always be the chance that the apprentice and the job aren’t right for each other – especially in this industry, with such elements as having to work in the cold – and that’s okay, sometimes you have to try it and have a taster to find out if it suits you or if you’re best suited to something else. But what we want to do is create the right environment and the right relationship with an apprentice, so that if it is the right fit, then they have all of the support and resources to help them make this a long-term career, and that’s what we’re doing through our mentoring.”

Recent research undertaken by British Marine highlights the skills shortage facing the industry. In 2016, British Marine’s report on the UK Marine Labour Market highlighted that 30% of companies responding to the survey identified critical skills gaps that are holding business back, with technical skills being the biggest obstacle to recruitment. 74% of businesses cited a lack of technical training, such as in manufacturing and engineering, as a barrier, and in its most recent Industry Trends Survey, published in January at the London Boat Show, one in five members reported a skills shortage.

Chris Holmes, Training Executive at British Marine – the representative body for the UK marine industry – commented on how British Marine is aiming to build on skills development across the industry:

“Helping our members to understand the benefits of apprenticeships is just one part of our role. British Marine is also supporting members who wish to form employer groups on how to develop the new, more robust marine-related apprenticeship standards.”