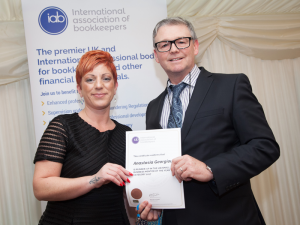 The International Association of Bookkeepers held their annual UK & International Business & Skills Awards in the House of Commons on Thursday 7 December. The winners were honoured during a prestigious drinks reception ceremony celebrating the achievements of a host of highly accomplished IAB members and industry professionals.

SFEDI Group and IOEE were proud to sponsor the IAB Small Business Mentor of the Year Award, which was won by Kris McCulloch MIAB.

We were delighted that Anastasia Georgiou, a Manager with Lloyds Banking Group and a committed IOEE Mentor, was announced as the runner-up for this award.

Anastasia, who attended the event in the House of Commons, said:

“I felt shocked, humbled and honoured to have been nominated and shortlisted for the award not to mention very privileged to have had the pleasure to attend the awards ceremony at the House of Commons.”

IOEE Mentor Manager, Paul Harper, who attended the event and had nominated Anastasia for her hard work and dedication to her mentees, said:

“It was my pleasure to present the award to Anastasia Georgiou for IAB Small Business Mentor of the Year runner-up. This award is rightful recognition for her volunteer mentoring over the last two years, where her dedication has been demonstrated by helping mentees during difficult periods to make tough decisions. Anastasia has supported developing businesses, which have seen their businesses go on to excel and grow.”

Other award categories included the:

SFEDI and IOEE would like to congratulate all the award winners and runners-up.

For more information about the awards , please contact Kelly Orford at the IAB on 01732 897754 or [email protected]